Well, really not that hard at all.

Since the first Feeding the 5000 event was held in London’s Trafalgar Square in 2009, these inspiring campaigns to shine a light on the incredible global food waste have “mushroomed” from Paris to Dublin, Manchester, Sydney, Amsterdam, Brussels, and other cities across the globe. Inspired by the hard-to-swallow reality that roughly one-third of the edible parts of food produced for human consumption — about 1.3 billion tons per year — gets lost or wasted globally, these large public events rescue food that normally would be wasted at farms, groceries and restaurants and turn it into stews and curries for up to 5,000 people. 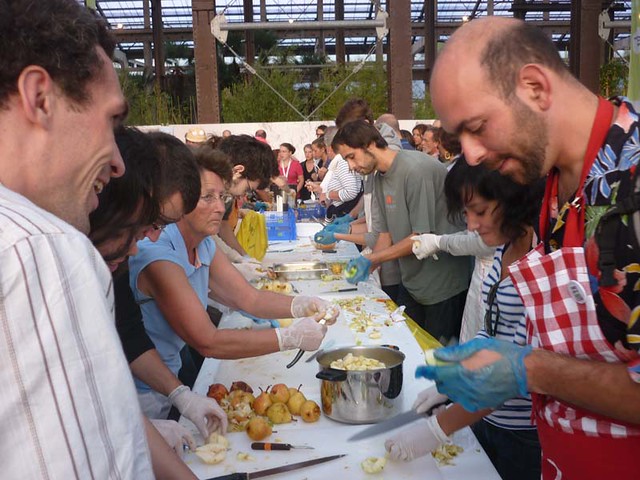 Preparing dessert from rejected but delicious fruits at the Feeding the 5000 event in Nantes on September 25, 2014.

Feeding the 5000 is coming to the United States for the first time!

On Saturday, October 18, from 12 to 5pm, EndFoodWaste.org will bring scrumptious “second hand” meals prepared from quality fresh food that would otherwise have been waste before it hit the stores to thousands of people at Frank Ogawa Plaza in Oakland, California. There will also be special presentations, grocery giveaways, and demonstrations on how to combat food waste in your kitchen.

Next Wednesday, October 22, from 11 to 2pm at The Pit and Top of Lenoir Dining Hall, Carolina Dining Services team members at the University of North Carolina in Chapel Hill will serve veggie curry, Brunswick Stew, Jamaican Fish Chowder, and Fruit Cobblers, all gleaned from salvaged fruit and vegetables left to rot at farms around North Carolina due to retailer’s strict cosmetic standards or to overproduction.

Feeding the 5K founder Tristram Stuart will be at the event in Oakland to call attention to the global food waste scandal.

Last year, I was personally initiated into the miracle of volunteers gleaning perfectly edible but deemed unsellable food, prepping it, cooking it, and serving it to an arena-sized crowd of appreciative locals. Attending the Ecocity World Summit in Nantes, France, I got to witness first-hand the amazing energy of a Feeding the 5000 event.

Here are some thoughts and impressions.

There are so many issues wrapped in the category of “eating” that aside from the simple fact that it’s one of the things all of us humans have in common, the production and consumption of food reaches into almost all facets of our planet’s well being. From the energy, water, and labor that goes into growing food to its impact on soils, emissions, and human health with issues of distribution, transportation, and access in between, there’s hardly an important environmental, social or economic area of life unaffected by how we grow, deliver, eat, and dispose of the things we eat.

It was thus very fitting that the Feeding the 5000 in Nantes happened in conjunction with Ecocity 2013, a conference series predicated upon whole systems thinking. When we got to the halls in the creative arts district on Île de Nantes, things were already in full swing. 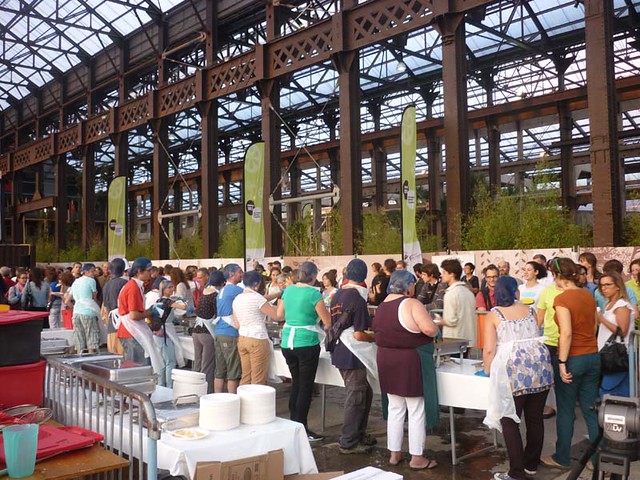 The line was quite impressive, wrapping several times inside the hall, and around the building, but you could tell by the size of the pots that the three groups organizing the event, Disco Soupe, Cré’Alters, and Nantes en Transition, had come well prepared. 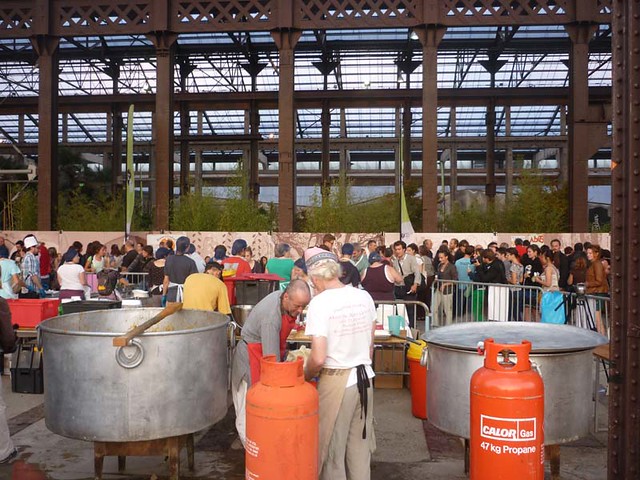 They had collected nearly a ton of vegetables that day from local producers and markets, and when we arrived, the giant vegetable curry was in the works. 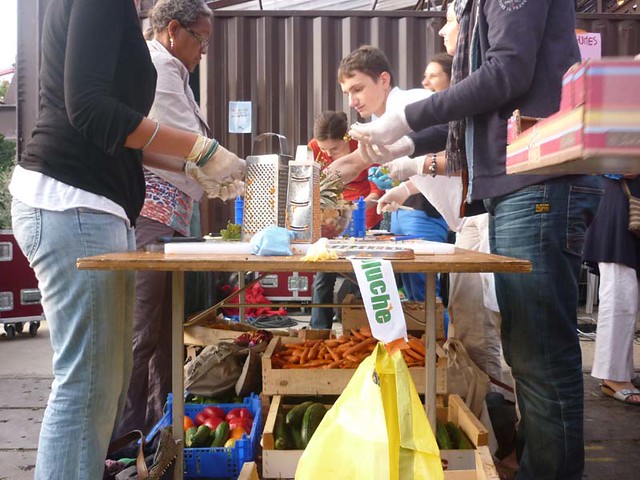 Local residents had been asked to bring their vegetable peelers to help out with prep work. What you don’t hear in the picture is the disco beats they were peeling to. Music is an integral part of any Feedingthe5K party. 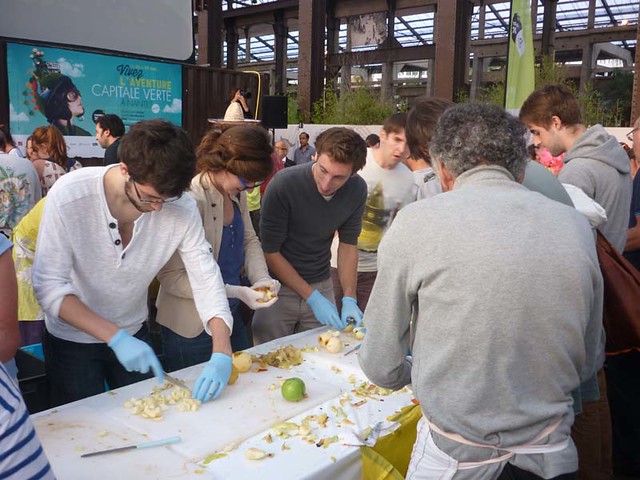 If you needed a disco break, you could groove to a brass band outside… 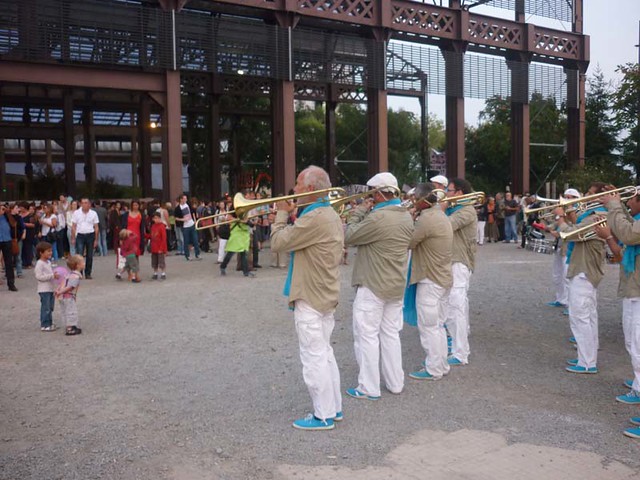 while enjoying your veggie curry… 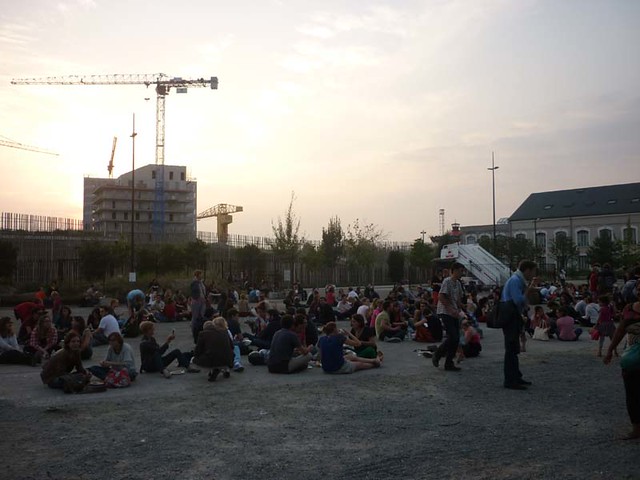 It was really a grand celebration, the way food should be. And yet, this kind of meaning- and joyful embrace of the imperfect is a powerful way to remind us why we’re here: every single fruit or veggie would have simply been thrown away had it not been for this gargantuan collective effort to salvage these treasures. While in France all this food would have ended up in an incinerator, in the U.S. it would have ended up in landfill.

As the NRDC’s Dana Gunders writes in her report, Wasted: How America Is Losing Up to 40 Percent of Its Food from Farm to Fork to Landfill:

Getting food from the farm to our fork eats up 10 percent of the total U.S. energy budget, uses 50 percent of U.S. land, and swallows 80 percent of all freshwater consumed in the United States. Yet, 40 percent of food in the United States today goes uneaten. This not only means that Americans are throwing out the equivalent of $165 billion each year, but also that the uneaten food ends up rotting in landfills as the single largest component of U.S. municipal solid waste where it accounts for a large portion of U.S. methane emissions. Reducing food losses by just 15 percent would be enough food to feed more than 25 million Americans every year at a time when one in six Americans lack a secure supply of food to their tables

The problem is not just the industrial food system and bad distribution, but it’s one of perception and aesthetics. Basically, only the most impeccable looking fruits and veggies ever have a chance of making it to market, like some sort of a Miss America contest for food. Even the most local and organic farmers tell me that if their tomatoes or eggplants have as much as the slightest dent or spot there’ll be zero chance of any grocery store or restaurant ever buying them. If eaters in even the progressive San Francisco food scene are that finicky, you can imagine how much rejected edibles that translates into on a nationwide scale.

I mean, who wouldn’t want to sink their teeth into one of these? 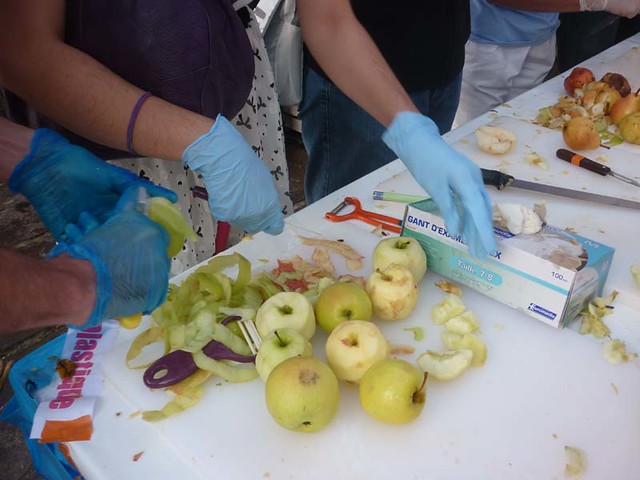 So what we need to do is change our perception of what good food should look like. Anyone who has ever had a mildly spotty apple or a lettuce with a few holes in it already knows that it doesn’t matter. Just as with people, what really matters is what’s on the inside. In fact, it could be argued that the ones with a few battle scars are ultimately more palatable, because they add a complexity in character that the shiny exemplars will never reach. 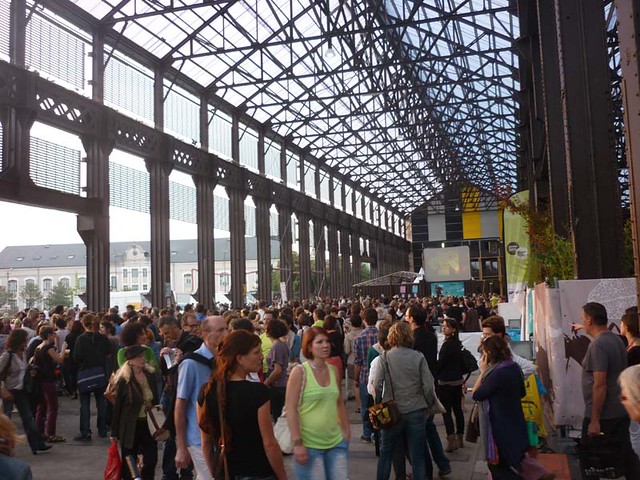 all photos by sven eberlein