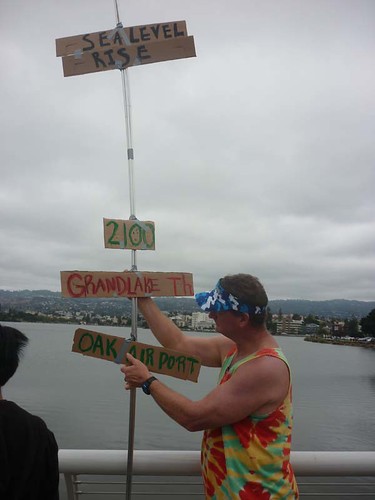 Yes, there was the big climate march in New York last weekend, the one that was largely ignored by the mainstream media.

It was a fantastic success, with 400,000 people flocking to a place that is both the pulsing heart of the world’s most wasteful nation as well as the nerve center of the world’s governing body, to shout it from the rooftops that a critical mass of earthlings are tired of seeing their home planet trashed right in front of their eyes.

But a good movement is like a human body or any other living organism: it can’t function with just a heart or a brain. If it is going to survive and thrive, there need to be a lot of other functioning organs or parts that can provide the kind of immunity and resilience required to make it long-term through a diverse and complex ecosystem. 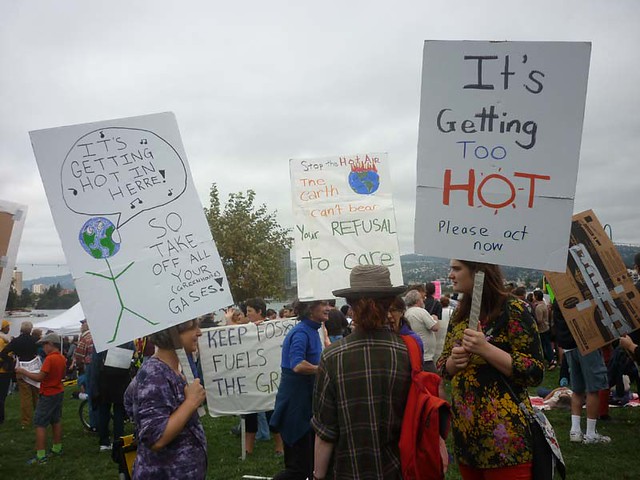 So to me, going to a rally 3000 miles west of the main march was like putting my finger on the movement’s wrist and checking its pulse. Should there be signs of vitality in such remote regions of this body, I knew that this uprising was meant for the long run.

I knew right away that this would be a good day when — walking in along the lake’s shore with my sweetie and an old friend — my buddy Bill from 350 Bay Area came paddling up beside us, giving us his personal assessment of the rally’s health. 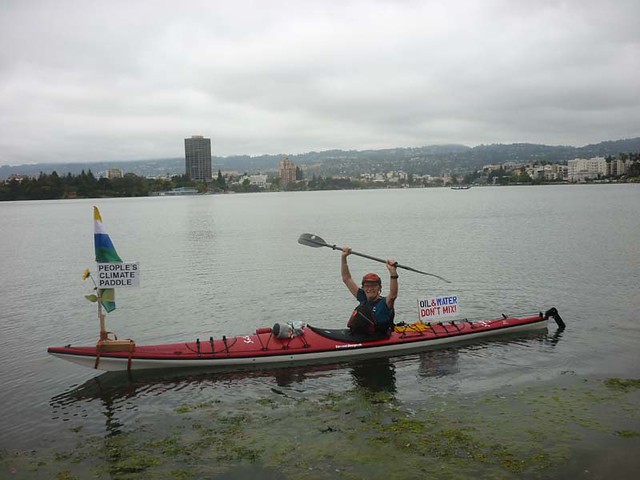 Meandering along the lake, we encountered beautiful hand-made banners and their designers. Getting these kinds of creative, sensitive, and intelligent statements was a clear sign that this organism was getting plenty of good oxygen. 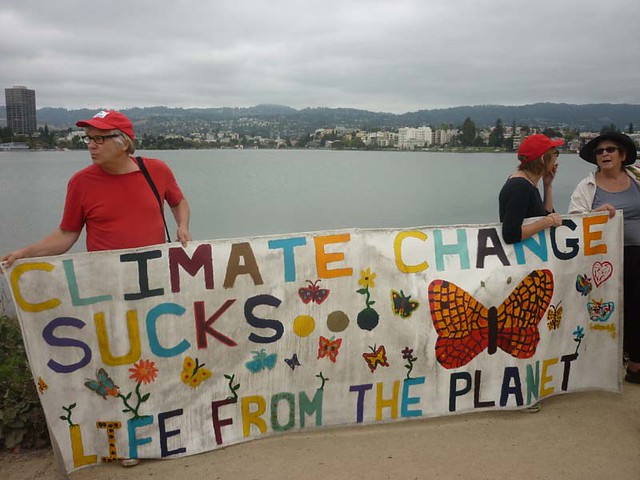 As we walked towards the stage, we were greeted by all kinds of diverse groups of happy people. You always know that your rally’s blood pressure is in great shape when you see lots of smiling Buddhists. 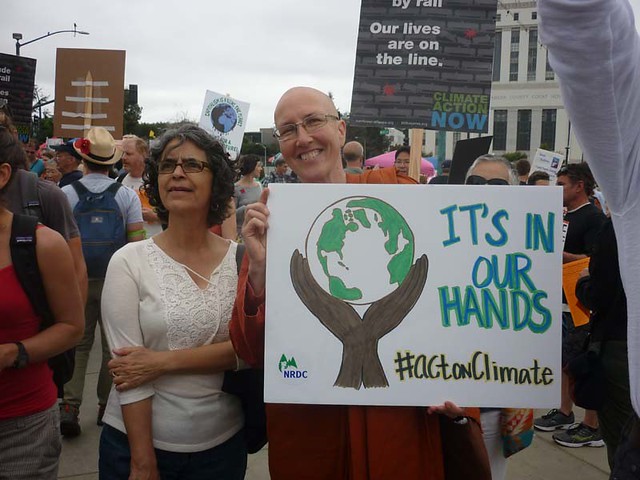 Moving deeper into the crowd though, we spotted a disturbance. 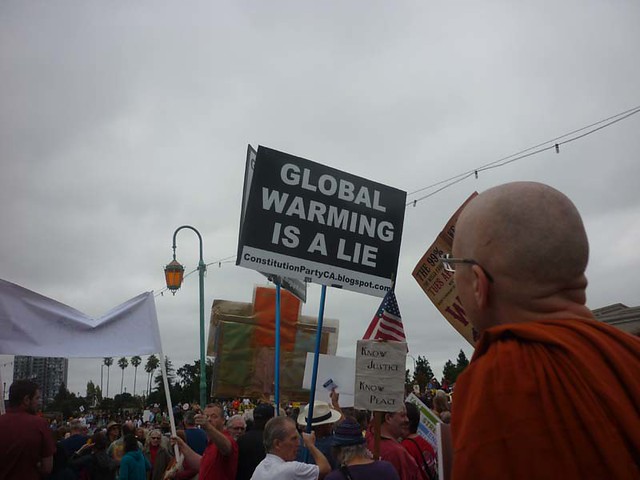 Every functioning organism needs germs to help build up its immune system. Before we knew what was happening, our collective organism had built up the perfect antibodies to deal with this virus, in the form of these two gentlemen from National Nurses United who attached themselves to the denier bug for the duration of the rally. 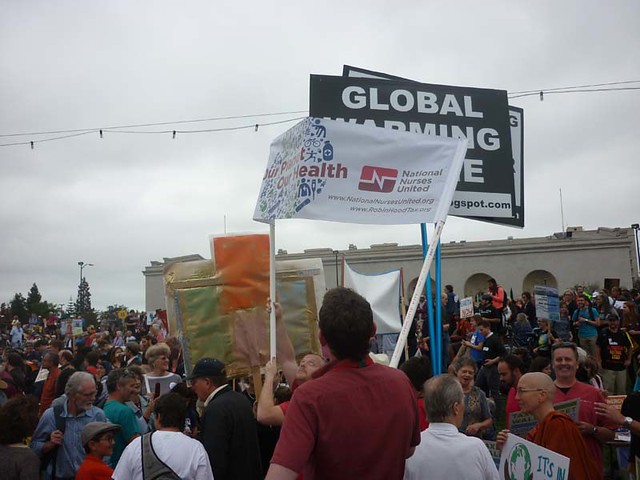 We worked our way to the side of the stage, where Andrés Soto of Communities for a Better Environment was MC’ing the event. If Andrés, who has been one of the leading voices in the fight for climate justice and against the greedy polluters of Chevron, had decided to stay in California for the occasion, it meant that this was going to be a living breathing support system. 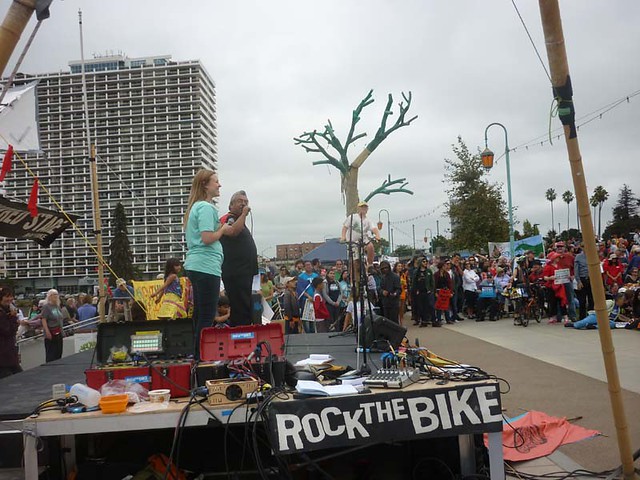 Not just living and breathing, but also pedaling, as the power for the stage was provided by the lungs of this organism, Rock the Bike. 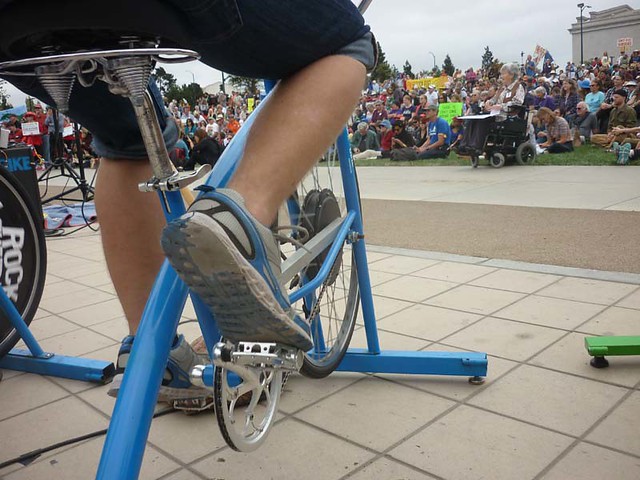 As soon as a bike became available, my buddy Johnny got to pedaling, unsolicited, to keep the peoples’ mics from going silent. A functioning support system run by an interdependent web of participating denizens. 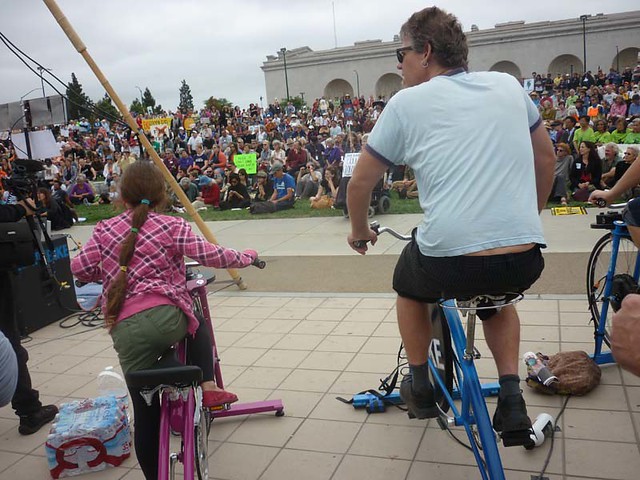 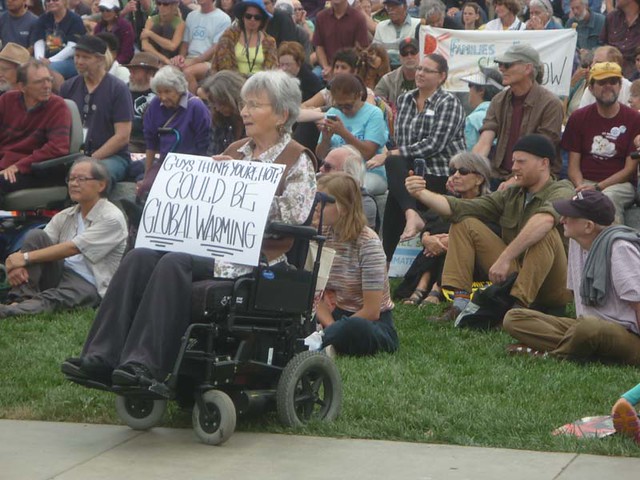 We walked around the back to get a view of the whole organism. 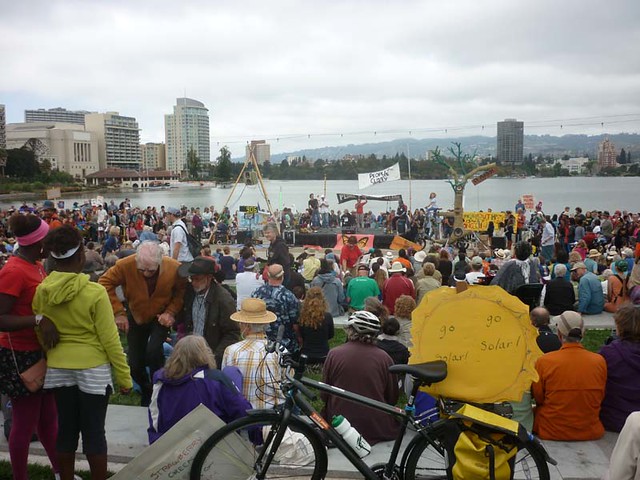 Great to see so many fresh cells. 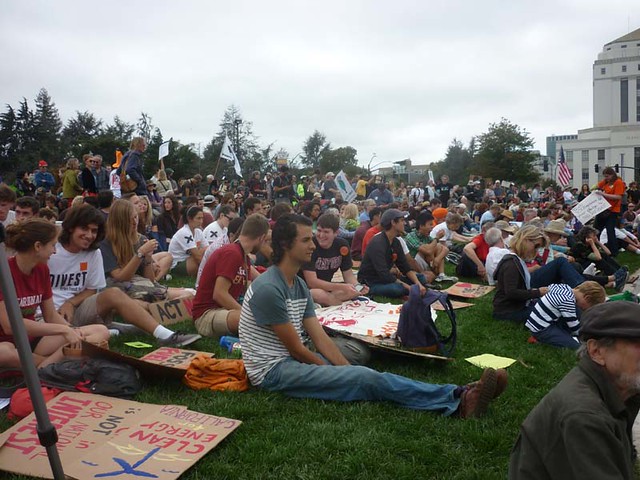 It wouldn’t be human if there weren’t some bad habits. Then again, the revolution will definitely not be televised this time around. 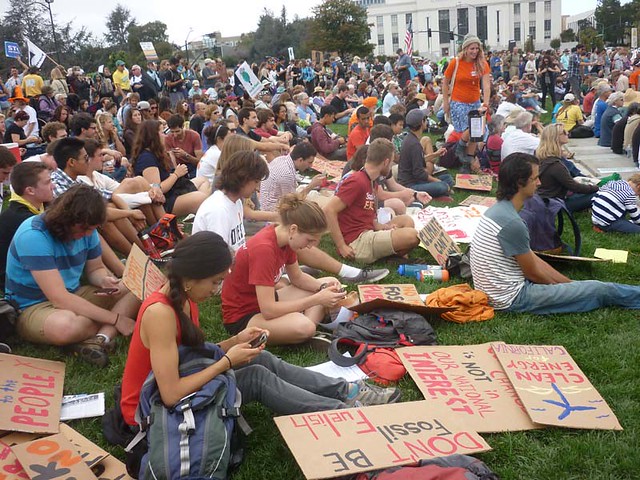 It was a truly self-aware organism, calling playful attention to how unwholesome the entire foundation upon which modern life has been built really is. 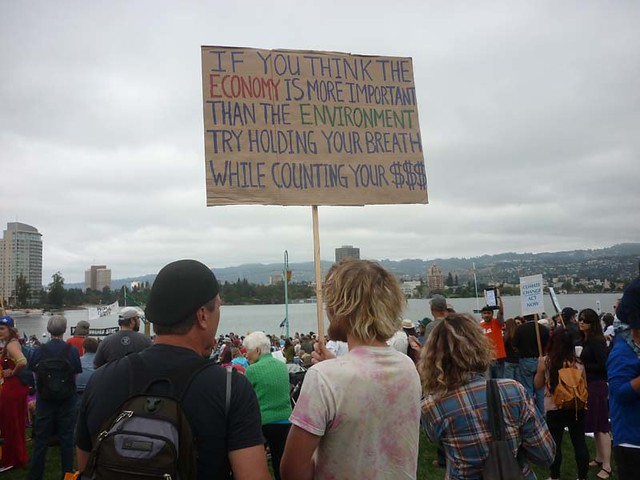 It was an organism keeping its arteries unclogged and healthy… 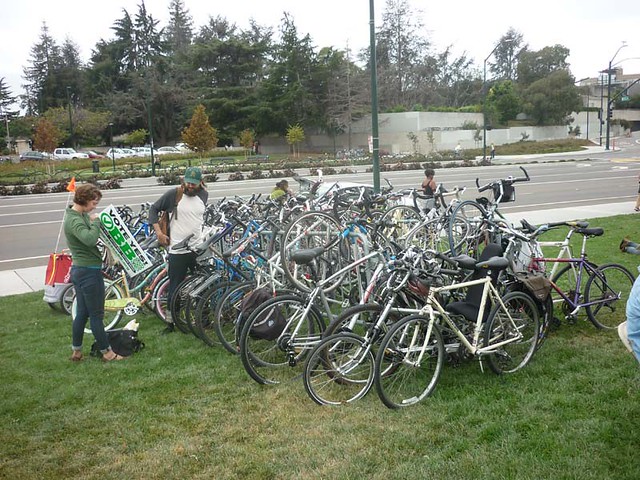 and its creative veins stimulated… 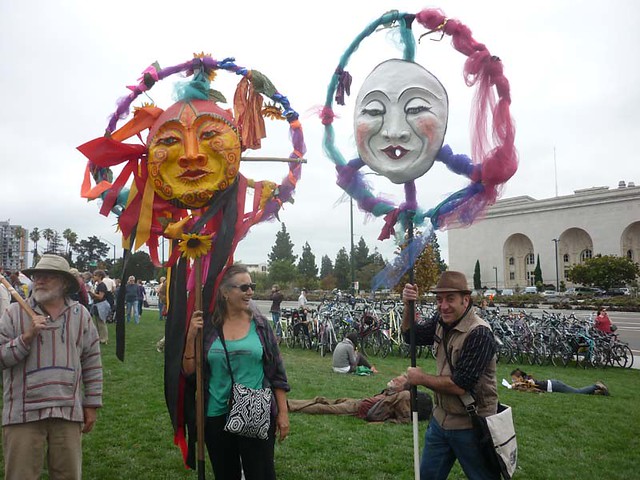 In short, it was a well balanced weaving together of strands and connecting of dots. Small and local enough to be resilient and supportive of the whole, but large enough to make an impact and stand on its own.

And that’s important, because in the end, each other and our connection to this planetary organism we inhabit is all we’ve got. 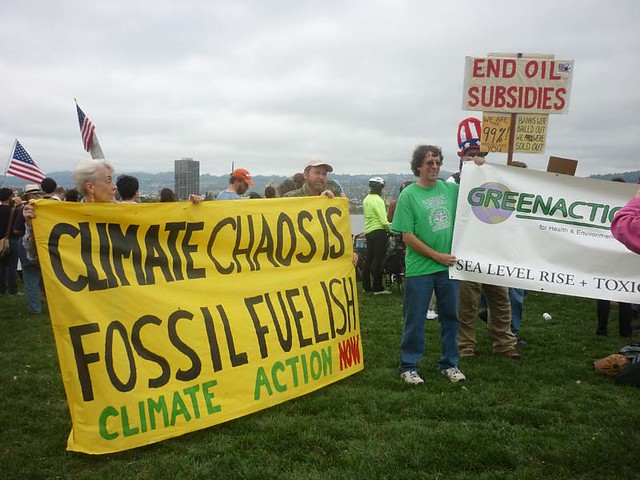