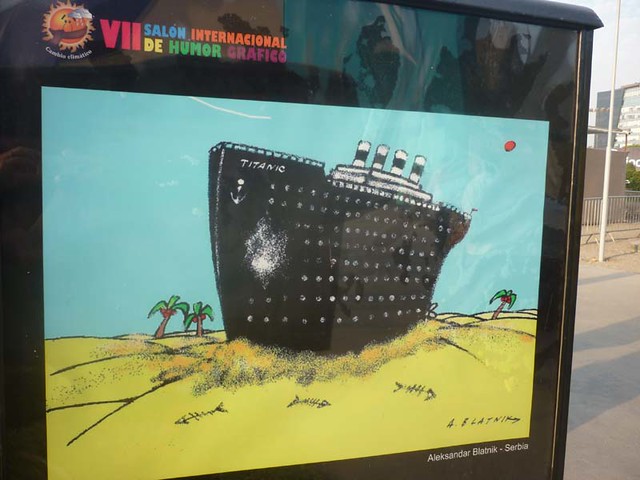 So here I am, fresh off the proverbial boat to witness Week 2 of the United Nations Framework Convention on Climate Change in Lima, Peru, aka COP20, or the 20th session of the Conference of the Parties, which, frankly, feels like the 200th. 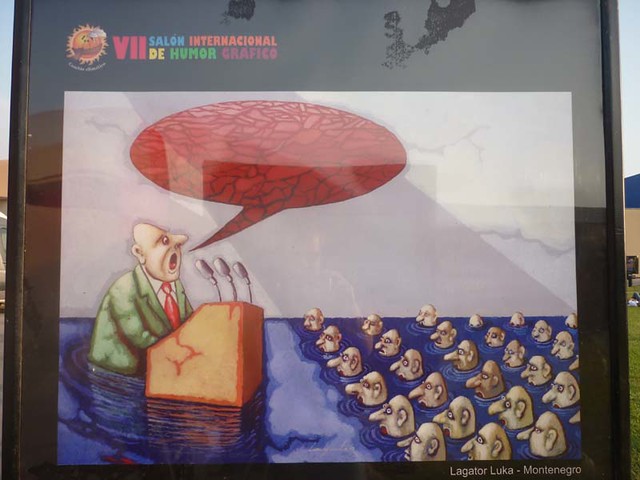 To be sure, under normal circumstances I would have no business getting airlifted here at the expense of a monster carbon footprint, just to post some morbid humor and be another dog barking up the same tree. 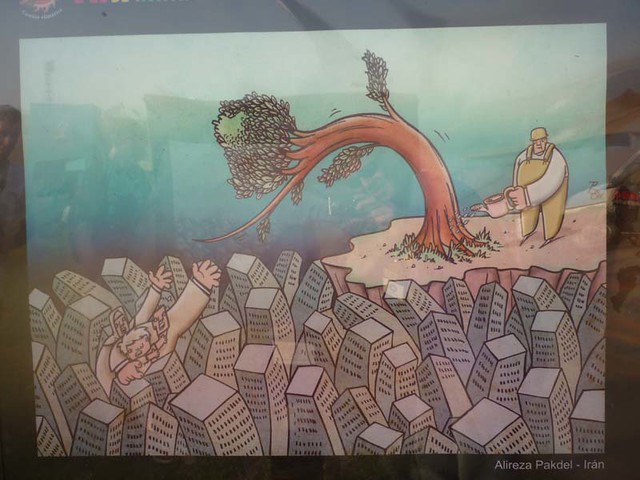 However, I was asked to make the trip down here to be part of the Ecocity Builders team, presenting our participatory ecocitizen mapping project to various stakeholders, and to network with local organizations to get the help we’ll need to set up neighborhood survey teams here in Lima, our newly announced 4th pilot city.

Turning the traditional top-down approach to urban planning on its head, this new approach uses a framework known as Participatory Action Research (PAR) that challenges structural barriers to information and provides opportunities for communities to directly lead the research process, in an attempt to create community-generated solutions in urban planning and public policy. Not exactly goose bump-inducing language, so let me paraphrase: Power to the People! If we want to keep our mothership afloat, we’ve got to educate, engage, and inspire people wherever they are. 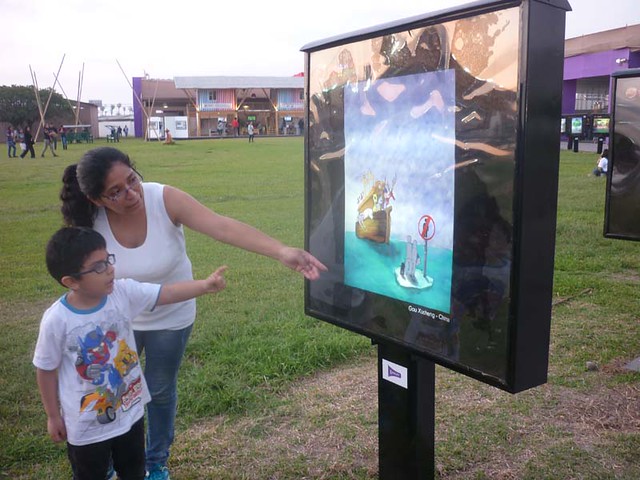 A look at the work we did in our first three pilot cities of Medellín, Cairo, and Casablanca explains why it is so important to engage and empower citizens if we are to transform cities into the kind of ecologically healthy, high functioning urban ecosystems that will be needed to meet any serious carbon reduction agreements coming out of the COP negotiations.

Okay, so I admit, I baited you with promises of mind-altering art and humor just to subject you to the nitty gritty of one of the many great efforts happening behind the scenes in a struggle that is much too deep and wide and complex to be solved by headline-inducing high-level statements and agreements. But I contend that this intellectual detour is relevant, not only because it tells the story of how I ended up meandering along 120 amazing art pieces created by cartoonists from around the world calling attention to the many ironies of our inaction on the most consequential threat humanity has ever faced, but because just like art and humor, giving voice to people’s stories from communities across the globe connects the many dots of climate change more viscerally than numbers and graphs ever could.

That was a chunky sentence. I think we’ve all earned ourselves a hearty laugh cry… 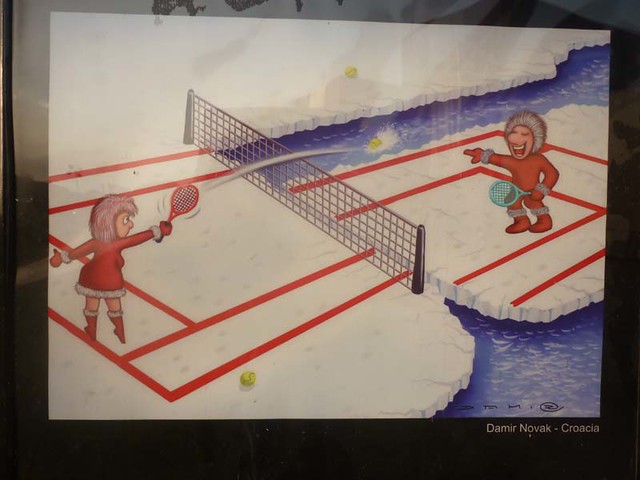 or two, because who doesn’t like their irony ice-cold…? 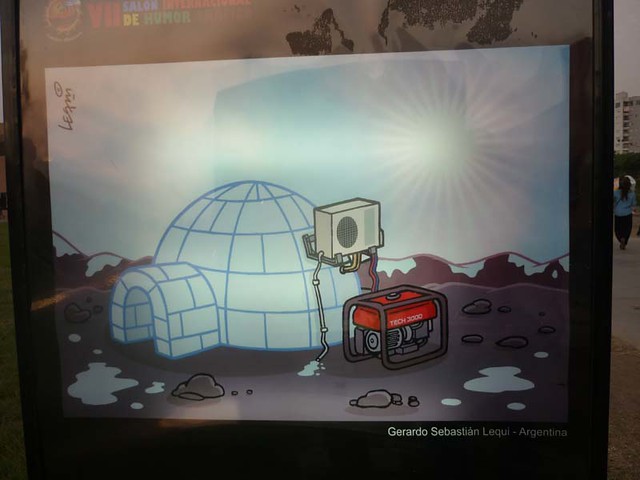 Before I show you more of these nuggets, let me just say that so far our mission has been a great success. On Monday, our Executive Director Kirstin Miller got to present the project and announce the launch of the Lima pilot in partnership with the Organization of American States, the US State Department, and the Peruvian Ministry of Environment, at the COP20 US Center. 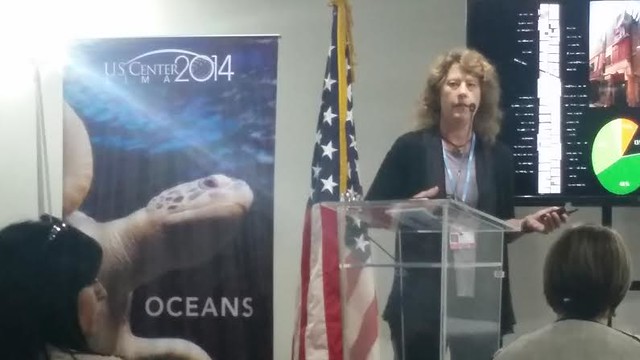 Kirstin Miller. photo: Energy and Climate Partnership of the Americas

On Tuesday, our Projects Facilitator Ashoka Finley presented maps and diagnostics for resilient cities at the Sustainable Cities Pavillion, or Pabellón Ciudades Sostenibles. 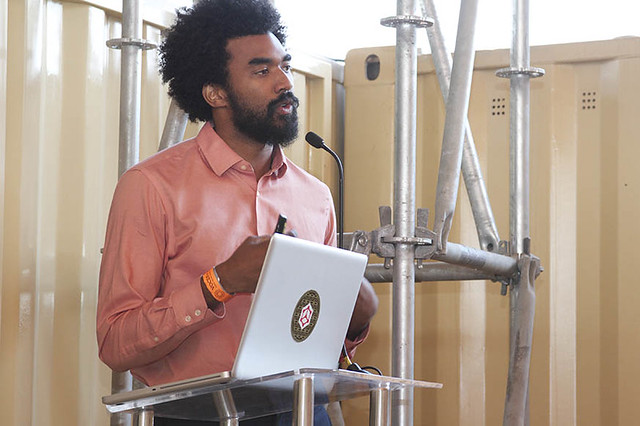 Personally, I hit the ground running yesterday, staffing our booth and pulling out every last of my Spanish vocabulary to answer questions for a very enthusiastic, mostly local crowd. Whenever my brain froze, Holly Pearson, who is our Lima coordinator and fluent in Spanish, bailed me out. 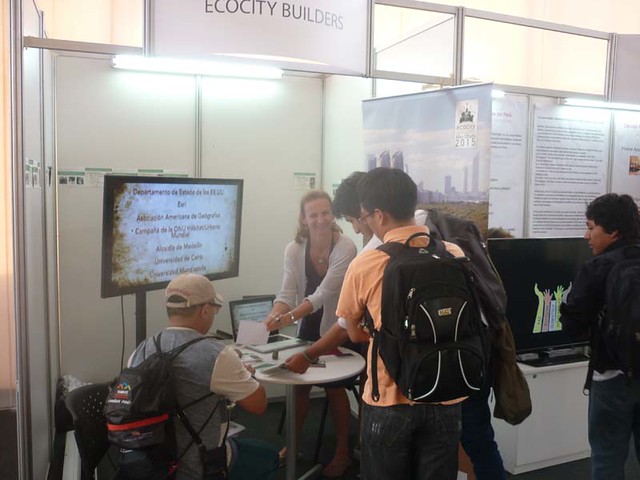 To make a long story short, in just one afternoon we met several folks both from local universities and organizations who were super psyched about getting involved with the project and connecting us with community leaders.

I did get hungry though, so I left the pavilion to hunt for a bite. Instead of ceviche, I ended up getting nourished by a row of banners along the path that I had hurried past on the way in. 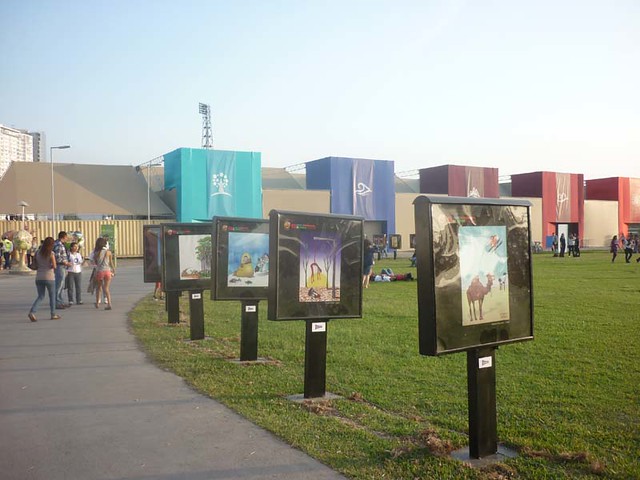 It’s an exhibit entitled VII Salón Internacional de Humor Gráfico, the 7th International Exhibition of Graphic Humor, featuring some of the most talented illustrators from around the globe. This year the theme is Climate Change, which worked out perfectly for COP, who realized the powerful messaging inherent in humor and integrated the show across the conference premises.

Follow me below for a look at some more of my favorite pieces. The beauty of these is that they need no editorializing, they’re best enjoyed raw and unfiltered.

Bottom line: time is running out and we’ve got to get creative really fast and soon to keep our little round ball from getting buried in the sand. 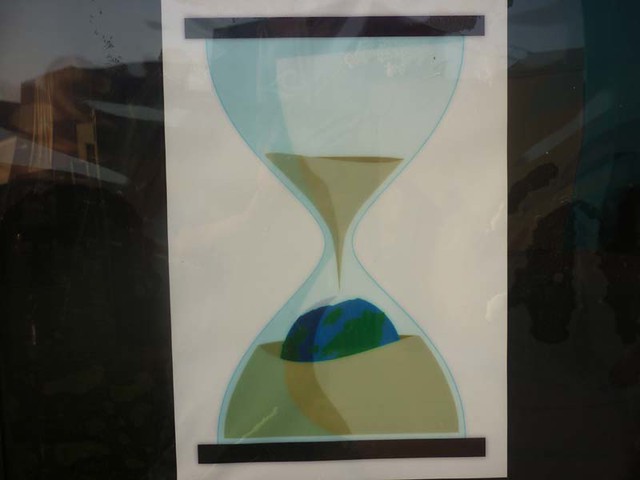 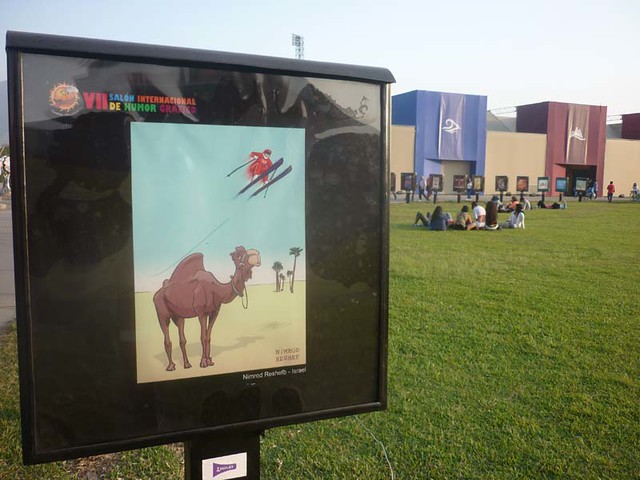 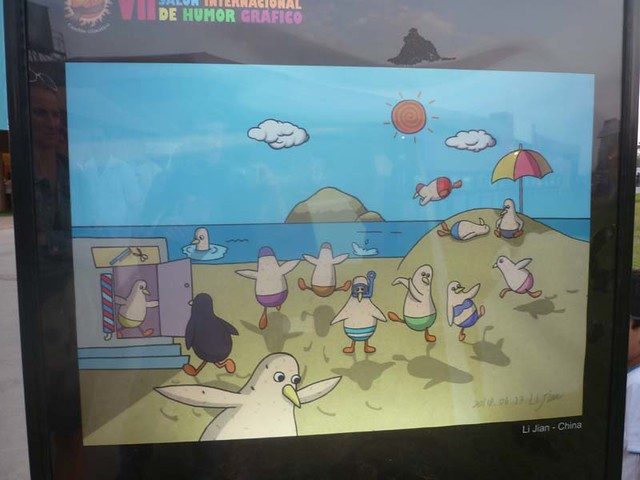 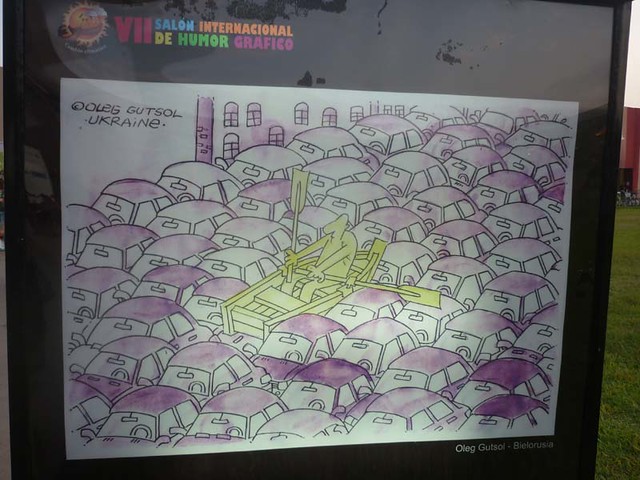 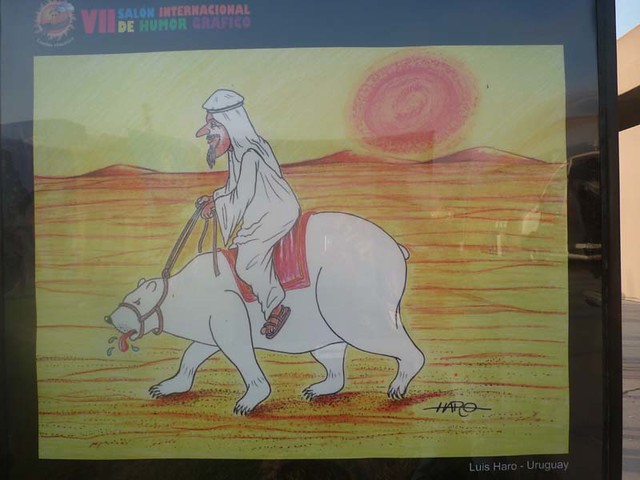 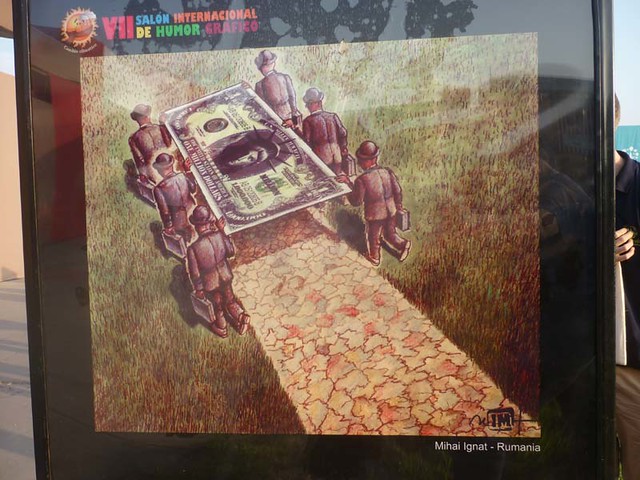 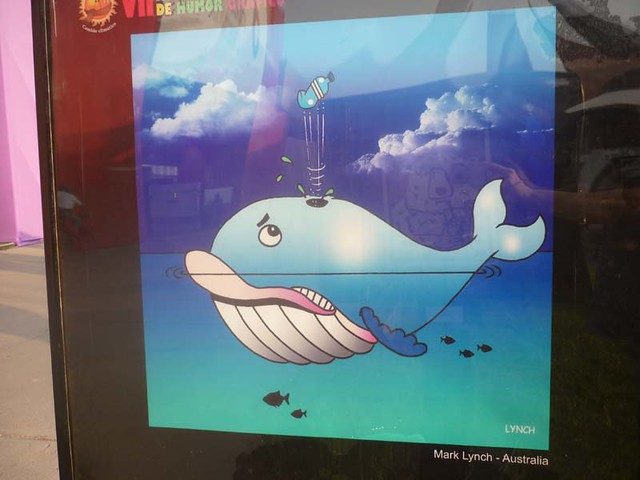 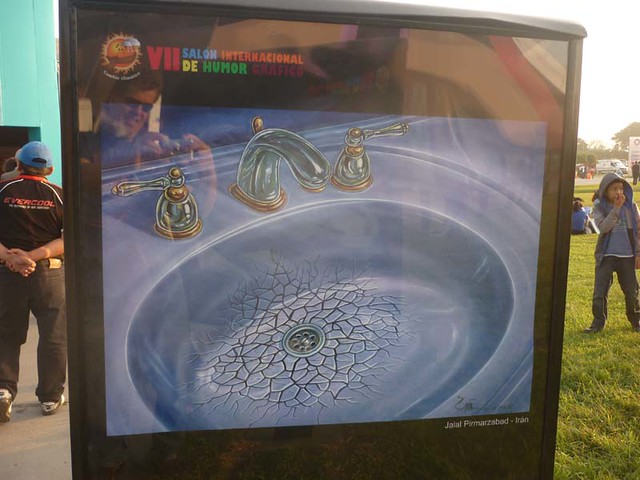 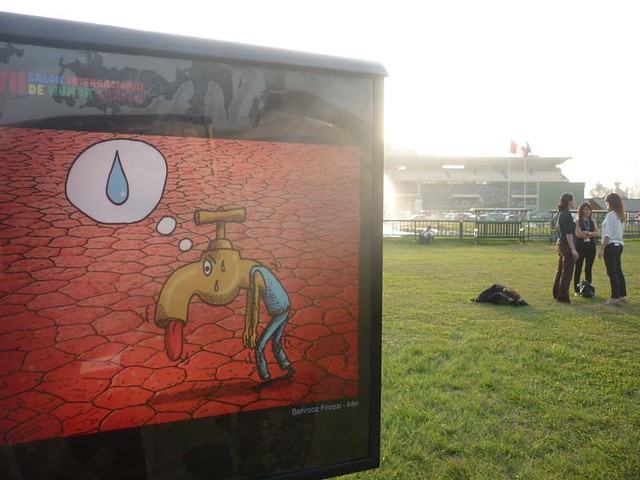 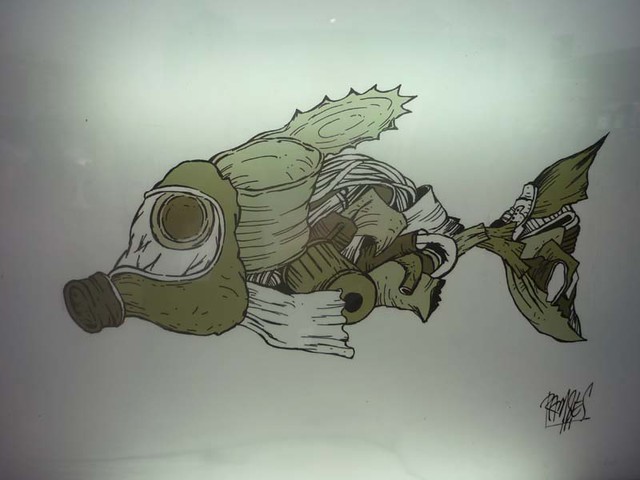 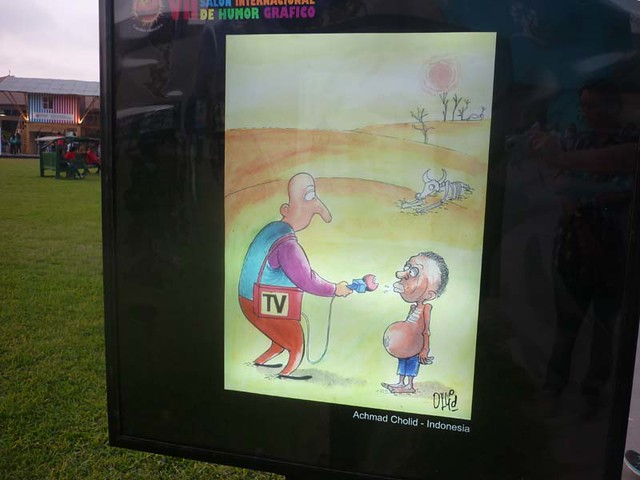 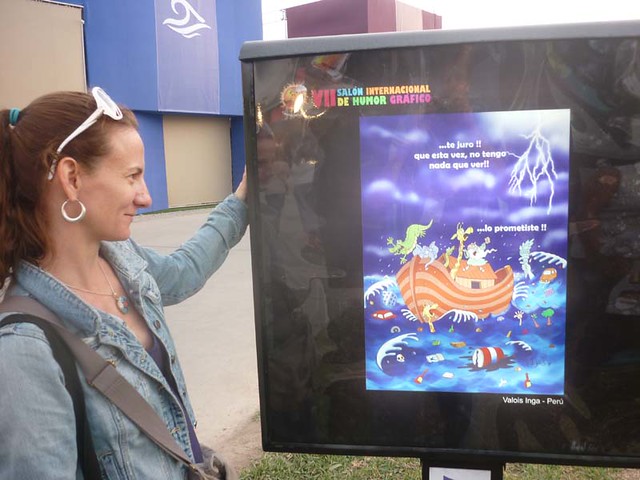 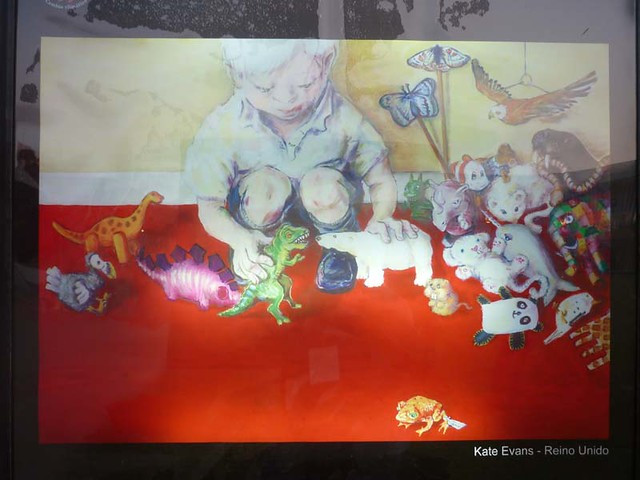 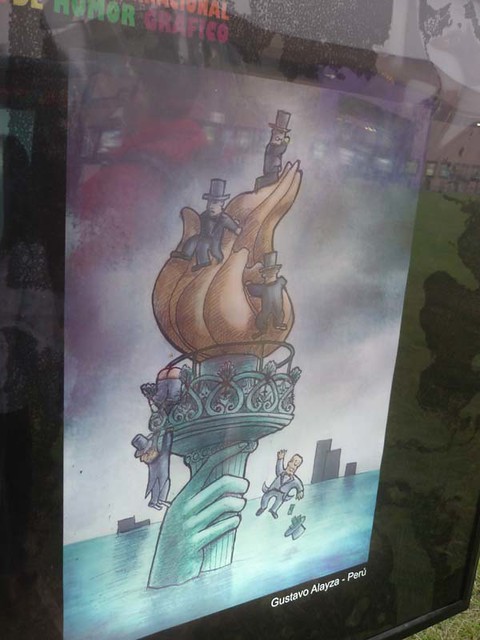 All photos by Sven Eberlein, except where credited otherwise.
PDF of all 120 pieces available here.