Yesterday’s Protest Funeral for EPA, the climate, and environmental justice at the EPA’s regional office in downtown San Francisco was just another little piece in the multi-dimensional grassroots movement to push back against this pitiful administration’s all out assault on our most sacred civic institutions and inspire participation and creative agitation. After sending an epic message to the world from Ocean Beach a couple of weeks ago, which I haven’t gotten around to posting about but here’s a little teaser anyway…

…the task at hand yesterday was to get together our most functional funeral attire, get a bouquet of flowers, and gather on the sidewalk to mourn the new chief’s lifeless relationship with all living things and lend our moral support to the agency’s employees who will have to endure that train wreck of a new administration first hand. As always, people amplified their sentiments with markers and cardboard. 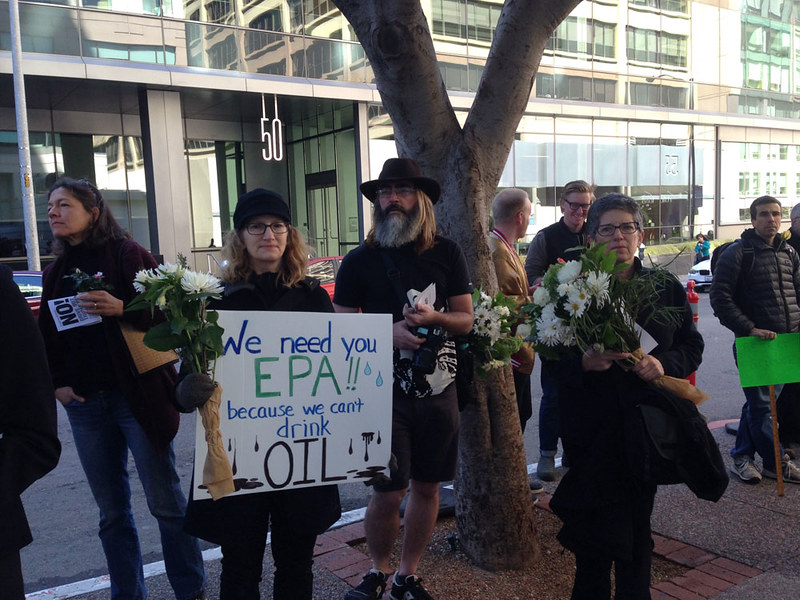 Organized by EPA Resist SF, one of the countless local groups that have sprung up since the orange wrecking crew has been given the keys to the bulldozer, the mission was as multi-faceted as the environmental problems we are facing. 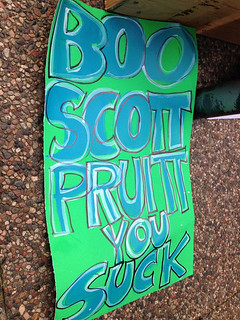 Scott Pruitt, new head of the EPA, is a climate denier who believes the federal government shouldn’t regulate environmental issues. This is urgent because the climate crisis requires a coordinated response. We are already seeing grave effects from our changing climate, and it is expected to get worse. If there was ever an issue that deserved our action, global catastrophe is it. We also know that environmental degradation often affects marginalized communities and communities of color first and hardest. We need to respond to Pruitt’s plans and demand not just a halt to the rollbacks of protections but a strong commitment to advancing the kinds of policies that will protect all people, especially the most vulnerable.

After our “funeral” services, we’ll share an uplifting message of support and empowerment for EPA employees and other organizations whose work is essential to protecting our environment and communities.

Yes sure, this was going to be a funeral, and I personally decided to go full-on death panel in my outfit…

but rest assured, this funeral was anything but surrender. 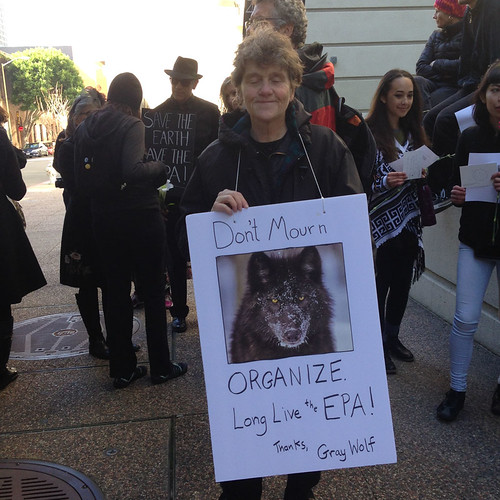 As has become a common marker of the orange resistance, there were so many thoughtful and creative details, from the two-dimensional… 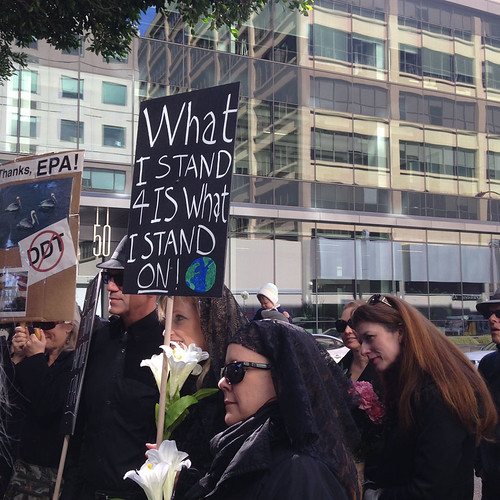 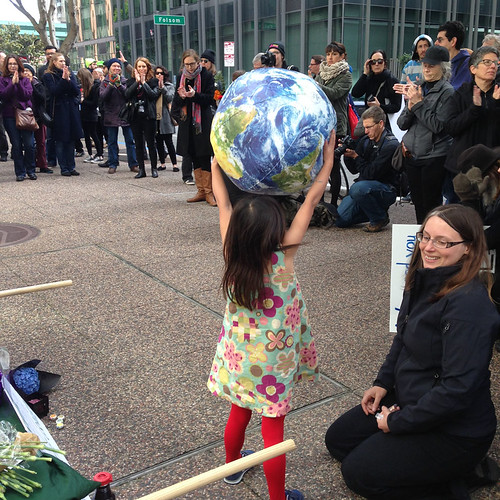 The handwritten notes of gratitude and encouragement we wrote, to be delivered to EPA employees… 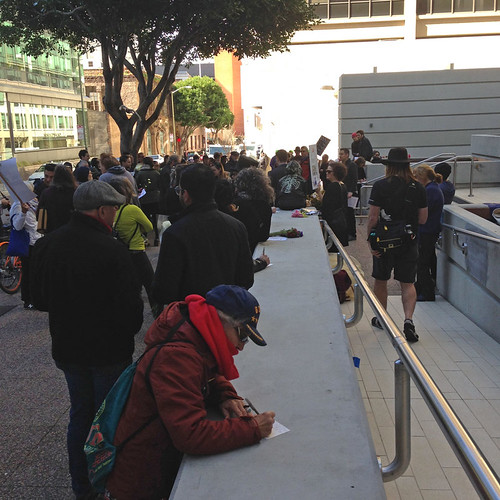 made you feel part of something much larger than just a protest.

These were my spontaneous scribbles… 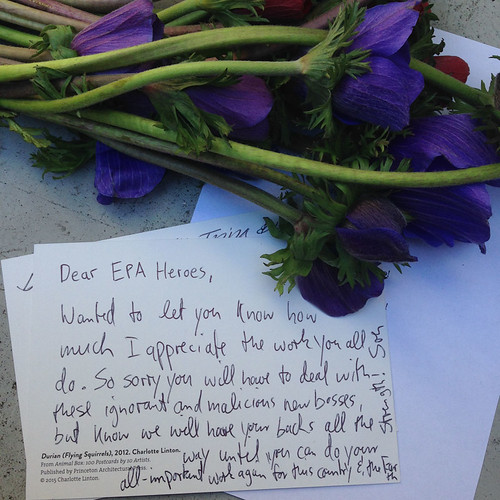 We proceeded to pick up the bullhorn one by one, read out our notes to everybody, and laid them on the coffin along with the flowers we brought. 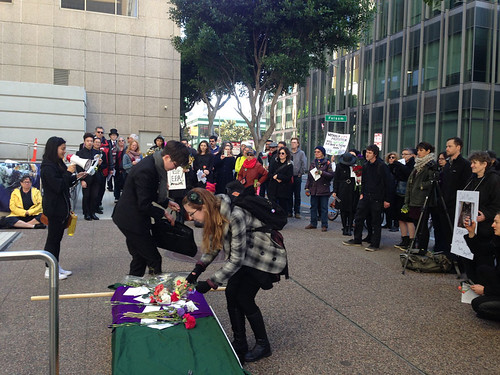 Of course, aside from being fun and meaningful, a mock funeral also makes for great theater, which is a pretty good recipe for attracting local media. In this case, it was ABC7 News that showed up to document the proceedings and interview participants. 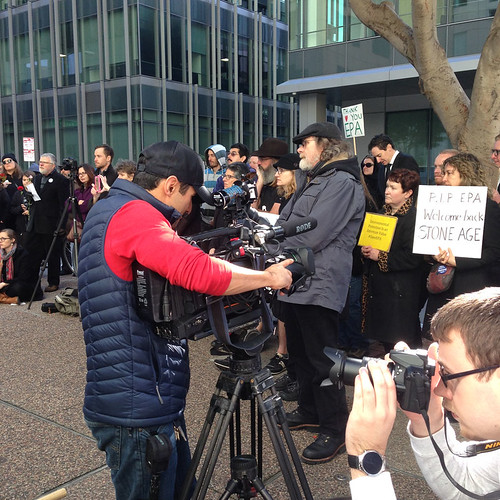 After a few “This is what Democracy looks like” and “Hey hey, Hey ho, Scott Pruitt has got to go” chants, there were four local speakers who reminded us that this funeral was much more of a beginning than an ending.

Lizzy Pyle, a Half Moon Bay high school Action Fellow with the Alliance for Climate Education, represented a new generation of engaged environmentalists who aren’t going to let a fossil fuel shill like Scott Pruitt destroy their future and the planet. 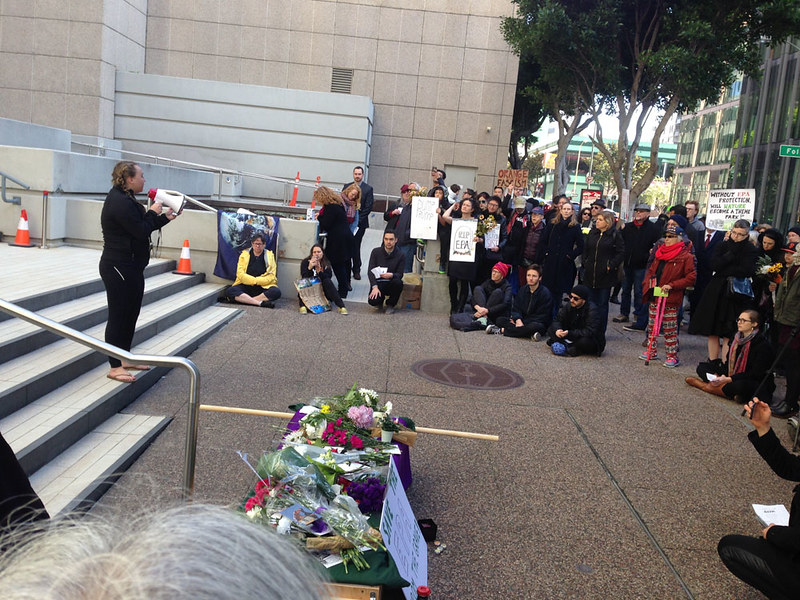 Rand Wrobel, Co-Founder and Director of 350 Bay Area, lifted everyone’s spirit with a witty eulogy that pointed to the crucial importance of continued and sustained local actions, in legislative campaigns and on the streets. 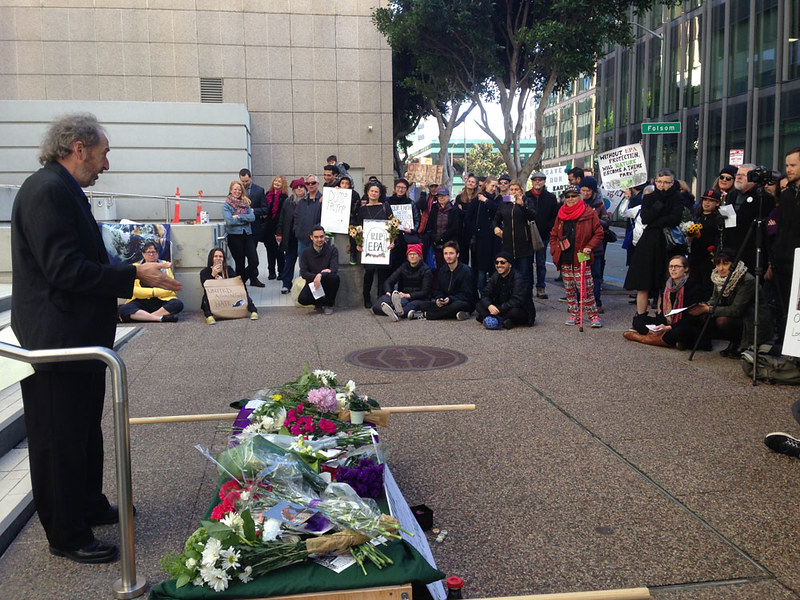 Indira Phukan, environmental educator from the Stanford Graduate School of Education, talked about her experience of learning about ecological issues as a young person of color and the importance of cultural understanding in connecting minority youth with science and nature.

Speaking of youth, Michael Green, CEO of the Center for Environmental Health, was accompanied by his two kids while pointing out the Toxic Shell Game in which American companies that use more than 84,000 chemicals today manage to evade and bypass regulations. While it’s already hard for the EPA to keep track of all these shenanigans, you know that with Scott Pruitt at the helm the CEOs of these companies are already rubbing their hands. Michael also gave a powerful crash course in the Trump/Russia/Oil axis and urged everyone to support the courageous whistle blowers at the EPA that we will all depend on in the coming weeks and months to derail the regime’s attempts to wreak as much havoc on mother Earth as they possibly can, just to make a few fat cats even fatter. 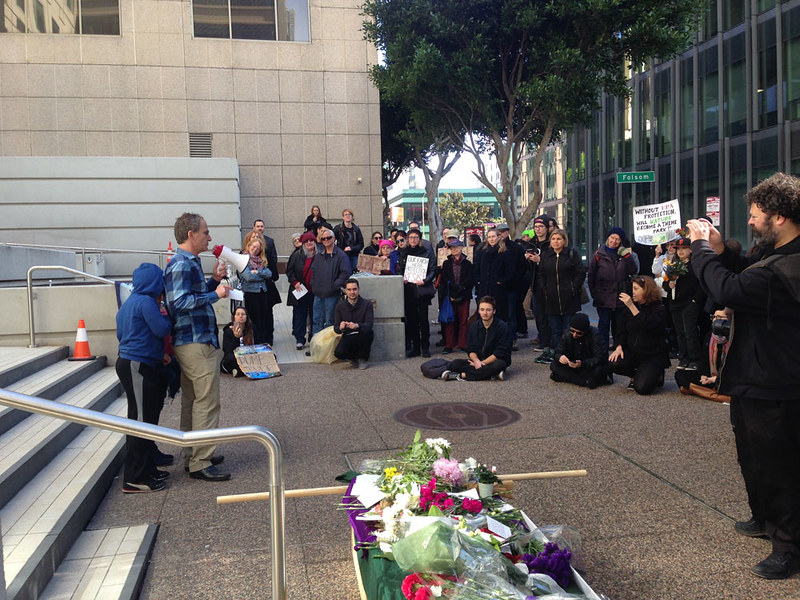 And yet, in all these direct actions I am sensing a collective soul that is about a lot more than just rejecting the dystopian, nihilistic trumper tantrum we are being subjected to. The vibe I am getting is that for every act of NO there is also a message of YES. Each rejection of the ugly and divisive is accompanied by an example of the beautiful and uplifting, as if people aren’t just content with holding the line against the regressive forces of the past but drawing a big circle for the vision of the future. 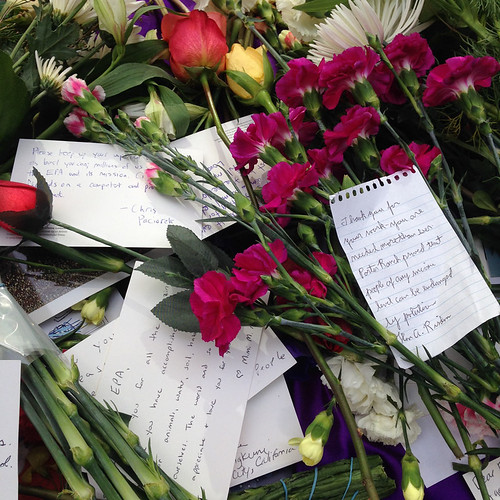 The primal roar by the moral majority to convert the energy that’s been unleashed into an unstoppable wave of people power toward the more inclusive, equitable and sustainable world we wish to see has only begun to sound. Its echo will be heard far and wide, in all corners of the country, for generations to come. 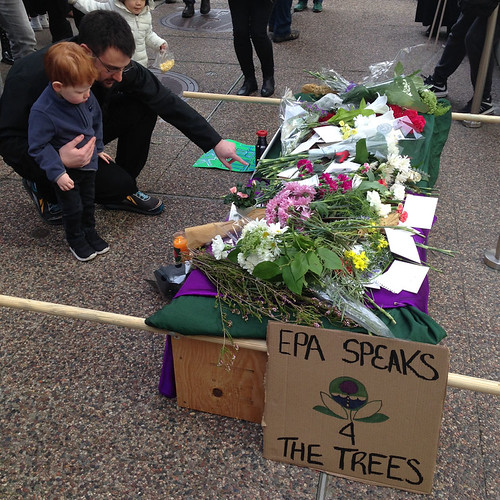